The mediumframed stallion has a very expressive head with big, bright eyes.

His top-line deserves special mention for its excellent proportions and strength. Zuccero’s legs are correct, with clearly defined joints and hooves of good shape and quality. To be eligible for grading, a Holsteiner stallion must have good movement and Zuccero performed convincingly also in this department at Neumünster. The walk under saddle is very regular and ground-covering. The trot is balanced, and definitely ground-covering and rhythmic for a jumping horse. The canter is his best pace, energetic, very regular, and carried by strong, powerful hindquarters.

Zuccero’s free jumping clearly demonstrates the advancement of the Holsteiner breed. His carefulness and jumping technique are exemplary and unquestionable an inheritance from great Cor de la Bryère. His scope and powerful push-off are qualities passed on by his sire Zirocco Blue.

The demands of international show jumping call for improvement and advancement in the breed. We should aim to breed horses with even quicker reactions, powerful take-off and agile jumping. Zuccero should be capable to meet these requirements. Moreover, he is expected to pass on his good top-line and thus also a strong back. Despite his modern appearance, he has a lot of depth and should be bred to leggy mares, preferably.

This stallion ist available at all stations of the Holsteiner Verband Hengsthaltung GmbH. With a click on the button you can get a full list of all stations.
Station overview
Pedigree of Zuccero

His sire, Zirocco Blue, is a Dutch stallion with international bloodlines tracing back to a French dam line through Mister Blue, Voltaire, and Le Tôt de Semilly. Under his rider Jur Vrielig he has won at international grand prix and Nations Cup level and took team gold at the Aachen Europeans in 2015. Mr. Blue used to be a highly successful international jumper under Bert Romp. Voltaire, by Anglo-Norman jumping horse sire Furioso, was successfully shown at international level by Jos Lansink. He is of special importance because of his great number of offspring on the international show jumping scene. Le Tôt de Semilly is one of the most influential French jumping sires. His produce also includes Diamant de Semilly, which means he is 2nd sire to Diarado.

Zuccero’s dam, state premium mare Zarese, is by Caretino, a proven sport performer himself. He made the top 10 of the WBFSH world sire ranking several times due to offspring including Casall, Cristallo, and Chandra.

At 4-year-old, Zuccero had first results in young horse jumping classes at A level and won the Elmshorn 4-year-old State Championship.
In 2017, the stallion could not be shown in competition due to a broken splint bone. Zuccero has been at Rolf-Göran Bengtsson’s yard since August 2018 and is very successfully shown by Bart van der Maat. The combination has won five young horse jumping classes through M level and placed internationally. Past season saw Zuccero highly placed in several international jumping classes, for example in Neumünster, Opglabbeek and Lichtenvoorde. Since 2020, Zuccero has been under the saddle of Rolf-Göran Bengtsson and demonstrates his impressive jumping ability on the international scene. His list of successes includes numerous clear rounds and placings for example in the horse shows of Opglabbeek, Exloo, Herning, Stockholm and Falsterbo. In 2021, he won among others a 1.45m class at the Herning CSI2* show.

The stallion’s 2017 Münster-Handorf sport test yielded excellent results. 8.5 for canter and manner, 9.0 for ability, 8.7 for rideability and overall impression resulted in 8.69 overall (weighted). These marks correspond with the judges’ commentary: “He displayed very good attitude throughout, from first training to the final day. The canter is very practical and long-striding. The stallion always has a very forward approach to the fence. We have observed him to be obedient, yet with lots of energy in the take-off and a scopey, seemingly effortless jump.”

Zuccero offspring have commanded attention at the Holsteiner stallion grading and elite riding horse auction sales. In the auction sale of the non-licensed colts at Neumunster in 2019, a Zuccero offspring, Zoronto, was the highest priced lot and Zuccero also had the most expensive three-year-old riding horse, secured by clients from Peru. In 2020, his three-year-old daughter Zamantha wowed the crowd with her jumping and was sold at a whopping 67.000 euros. He had a first son licensed at the 2021 Holsteiner stallion grading, Zuccarello, who was described by the breeding director as follows: "A stallion with loads of presence, convincing with regard to type as well as over the jump. This stallion is characterized by his quick leg technique and the way he carries himself at a canter." 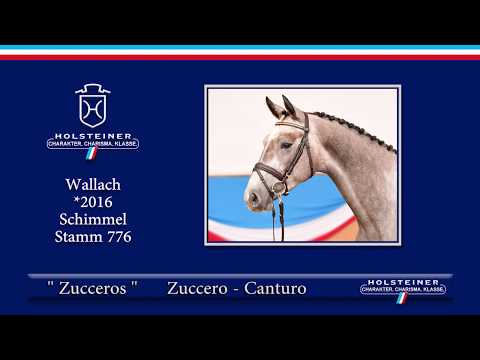 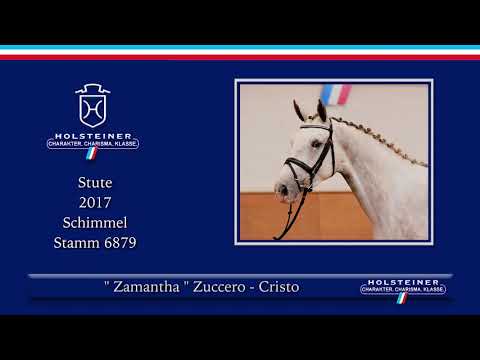 2. Report of the breeding district

3. Report of the young breeders of the breeding district

5. Report of the Association

6. Preparation of the Assembly of Delegates in early summer 2023

6.1 Resolution on the proposals for 2 board members to be elected in the
early summer 2023

Signed by Ulrich Steuber
(First Chairman of the Board)

Right at the beginning of the year, an event of the Holsteiner Verband celebrates its premiere in the Holstenhallen in Neumünster: From 9 to 11 February, the stallions of the 2020 crop will be licensed, auctioned and breeders honoured.

On Saturday, 25 March 2023 we welcome Holsteiner fans and prospective buyers to the 37th Holsteiner Spring Auction in the Fritz-Thiedemann-Halle in Elmshorn.

verband
Here you can find more information and the entry form
19. April 2023
Mare Performance Test (1-Day Field Test)
Westerstr. 93, 25336 Elmshorn
Plan route
The entry form for the field test in Schleswig-Holstein can be found in the
show more

The stallion licensing and stallion book registration is held on 25 April 2023 at the Elmshorn Holsteiner Verband facility. At the licensing, the stallion entered for grading will also be shown under saddle.

verband
Here you can find more information and the entry form
10. May 2023
Mare Performance Test (1-Day Field Test)
Westerstr. 93, 25336 Elmshorn
Plan route
The entry form for the field test in Schleswig-Holstein can be found in the
show more