Adagio won the French Saint-Lô stallion licensing at 2-year-old. When presented again at 3 years of age, he won reserve champion of his age group at an overall mark made up of the marks achieved for type, basic gaits, free jumping, rideability, and jumping under saddle. In particular the type displayed by this Lamm de Fetan son is impressive and in line with the general conception of a breeding stallion. His head is expressive, with a long and well-set neck, pronounced withers and a well-structured back with harmonious neck and croup proportions. He has correct legs with slightly long hind pasterns, most likely an inheritance of his maternal grandsire, Calypso II. His hooves are big, strong and well formed. Adagio’s movement is exceptional for a stallion with French show jumping breeding and fully complies with the Holsteiner breeding goal, as demonstrated at the 2014 Schlieckau 30-day stallion test where all basic gaits were rated above average. Adagio was given 9.13 for rideability and 9.0 for jumping aptitude. All Adagio riders unanimously emphasize his great willingness to perform, his excellent character and his quality jumping. Adagio left a very good impression during 70-day performance testing as well, with his jumping ability graded 9.08, free jumping as well as under saddle. Quite remarkable for a stallion with French jumping breeding, he scored 8.5 for ridability. Under Maximilian Gräfe, he placed in young horse jumper classes to M level and won L level classes scoring as high as 8.8. Since last year, Inga Czwalina has got the ride on Adagio and has performed excellent rounds at domestic level, collecting placings in jumping classes to S*. His sire Lamm de Fetan, successfully shown by Timothee Anciaume, was among other achievements a member of the French team at the Aachen CHIO in 2009, won the Valencia leg of the Global Champions Tour in 2010 and was sold to Edouard de Rothschild in 2010. His sire Fergar Mail (Chapultepec la Silla) by exceptional TB sire Laudanum won the Fontainebleau Championship at 5-year-old and was then sold to Mexican stud farm La Silla where he became a breeding stallion exclusively after having had to undergo colic surgery. His offspring include Lirving de Volsin (Kate Levy/USA), Xel HA La Silla (Michelle Parker/USA), Chela LS (Ashlee Bond/USA), Singular LS La Silla (Marcus Ehning) and Raia d’Helby (Nick Skelton/GBR). Lamm de Fetan is a grandson of French top sire Le Tôt de Semilly, the sire of Diamant de Semilly. Adagio’s dam is Pepite de Talma by Contender. She has produced the Selle Francais-licensed stallion Toulouse de Talma by Diamant de Semilly as well as Adagio’s one year older sister, Very Nice de Talma by Baloubet du Rouet, winner of the French Championship at Fontainebleau in 2014. 7-year-old she was placed in international jumping classes to 1.40m level under Pénélope Leprevost and Regis Bouguennec and won seven classes at 1.30/1.35m level. Through Credo de Paulstra by Galoubet, the maternal line traces back to a mare by Elf III, in her turn second dam to Ideo du Thot, winner of World Cup jumping competitions under Beat Mändli. Adagio’s first Holsteiner foal crops have been very promising. In 2015, an Adagio offspring became the Behrendorf elite foal auction’s top-priced lot. Last year, several Adagio offspring attracted the inspection committee’s attention and qualified for the foal championships. A colt bred by Hans-Werner Sachau out of a Cormint-Corofino I dam took second place in the Dithmarschen championship and an Adagio filly out of a Calido I-Parco/TB dam (Gabriele Pochhammer, Windeby) placed 2nd in the Herford foal championship. Considerations for breeding: A stallion greatly influenced by TB blood with lots of energy, Adagio should be able to improve mares with shortcomings in these departments. His first foal crops have been very homogeneous and of high quality in terms of type and movement. The stallion passes on height with great reliability.

Click on the preview image, to see Adagio de Talma SF in action. 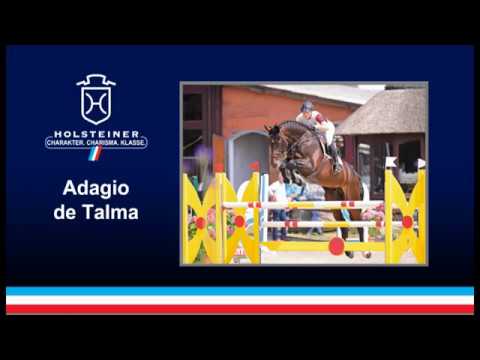