New blood for German sport horse breeding: IL DIVO embodies the classic TB long distance racer. The Dashing Blade son is characterised by long lines and good proportions, type, elegance as well as exceptional movement. He is the well-respected racing stable Wöhler’s first home-bred winner. Raced over three seasons, he had 15 starts with three wins and four placings in listed and Group races run over distances of 1.900 – 2.400m. He placed 2nd in the Bavaria Classics Munich (Group III) and 10th in the Hamburg German Racing Derby in 2009 and carried a maximum weight of 92.5 kg. Having been retired from the race track, Il Divo won second reserve champion at the “Schaufenster Vollblut” in Münster 2010, where he caught the eye of state stud director Dr. Astrid von Velsen-Zerweck: “A tremendously attractive and elegant horse characterised by uphill movement and lots of impetus.” Thanks to his uncomplicated rideability, he is able to display these qualities under saddle, as well. He stands out for his wonderful temperament. Il Divo has been licensed for Oldenburg in 2011, and 2012 saw him licensed for Southern Germany, Hanover, and Trakehners and approved for the Baden-Wurttemberg breed society’s event horse breeding programme, as well. The Celle and Schwaiganger state studs also count on Il Divo’s quality. His first foal crops were absolutely convincing as to type, shape and structure, correctness and quality of movement, as well as easily handled as he also passes on his sweet temperament. His sire, Dashing Blade, has made a name for himself in warmblood breeding through his TB sons Faberger and his full brother Full House, Fragonard, Lucio Silla, Seborga and Zöllner. His dam, Independant Miss (by Polar Falcon), also produced Isfahan (by Lord of England), the 2015 winner of the prestigious Group III race “Preis des Winterfavoriten”, as well as Incantator, another Group III winner.

Click on the preview image, to see Il Divo xx in action. 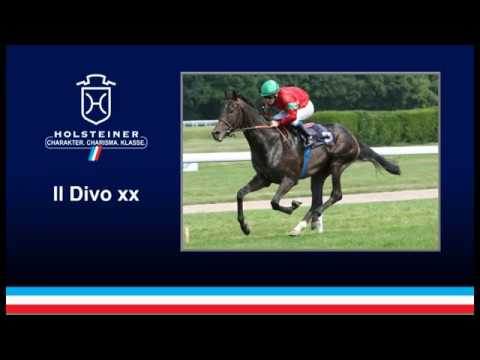