In addition to their first priority – the jumping stallions - the Holsteiner Verband stallion keeping GmbH is also striving to acquire high carat dressage stallions. When looking for a dressage aspirant with a genetic background well suited for Holsteiner breeding, Goldball, a Goldberg son owned by the Paul Schockemöhle horse keeping GmbH caught their attention. In terms of type, movement, and bloodline, the stallion already approved for the Mecklenburg and Oldenburg studbooks has many qualities required for a dressage horse sire in the Holsteiner breeding programme. In the end, the Holsteiner Verband stallion keeping took the opportunity to purchase a 50 per cent share in the stallion. According to the agreement, Elmshorn is standing and training the stallion.

Even though Goldball was still in the midst of his physical development in March 2018, his great structure clearly influenced by TB genes was obvious even at that time. Particularly impressive about the dark bay stallion standing 170cm at the withers are his big, calm eye, his excellent long lines and his correct legs.

He displays big movement with good rhythm, in hand as well as under the rider, always very elastic and with an up-hill tendency. The stallion completed 14-ability assessment at Neustadt upon Dosse with very positive results, as he received the subscore 9.0 on temperament, character, willingness to perform, trot, canter, and rideability from the test rider, finishing the test on a total dressage weighted mark of 8.88.

In 2018 the stallion was shown in a ridden class where he finished on first position.

Goldball’s ancestry is of particular interest for the Holsteiner studbook. His sire Goldberg is by Amazing Star, an own son of Flemmingh (by Lacapo), a Holsteiner stallion with an excellent reputation in Dutch dressage horse breeding.

Goldberg’s offspring includes stallion graded sons as well as a Westfalian champion mare, Gloria. Ridden and produced by Hubertus Schmidt, Goldberg has not only chalked up wins in ridden and young dressage horse classes, but also won a dressage class at S level in 2018.

Goldball provides an interesting option for breeders with dressage ambitions. Due to his modern conformation he can be used to improve with a view to size, long lines, and long legs. His exceptional abilities as to rideability and basic gait make room for new breeding decisions.

Click on the preview image, to see Goldball in action. 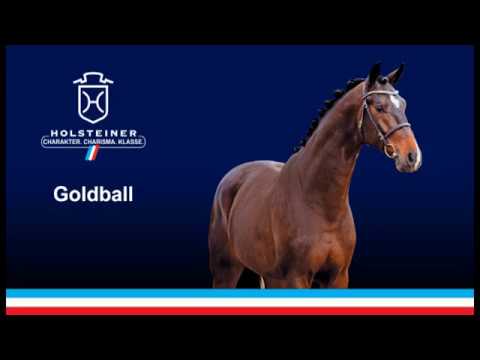