The Cassini I blood has had a great impact on a whole era of Holsteiner breeding, culminating in his son Cumano and Jos Lansink winning the 2006 WEG. Other than Cumano, in particular Eurocommerce Berlin, Rosalia la Silla, Carino and Carambole have earned worldwide recognition for the Cassini I blood and thus the Holsteiner studbook.

Cumano’s importance lies not only in his sporting career but also in his stud value. Bred only for a few years, first and foremost in Belgium and France, he is a household name through offspring like Neptune Brecourt, Navalo de Poheton and Chilli Pepper van de Helle.

His resounding ability to pass on jumping quality, scope, and performance attitude is rooted in his sire line as well as in his dam line. With various highly successful branches, the mare family 318 counts among the most reliable jumping horse producers. Through Chanel II, a Landgraf I daughter, the dam line traces back to Weisse Dame, the famous Caletto II daughter. She in her turn carries Thoroughbred and Arabian blood through Marlon (TB) and Kalif.

Belgium-bred Corfu’s breeder, Eric Goosens, went to great lengths to have then 23-year-old Hera bred to Cumano who was only - and scarcely - available through frozen semen.

The big-framed colt underwent an excellent development from the time he was presented for pre-selection to the actual Neumunster stallion grading. In late summer very tall, but not very muscular, Corfu had beefed up to international youngster calibre for the grading. The Cumano son’s most outstanding point are his big frame, his strong top-line and his correct legs. The stallion’s tremendous jumping ability is particular impressive. Despite his height, he is an agile jumper with very good reactions. His quality canter is of particular importance for a future show jumping career.

In view of his own sire Cumano as well as his high quality dam line, Corfu should make a good sire as well. With just a minimal amount of Cor de la Bryère blood and due to his special body structure and exceptional jumping ability he is suited to breed many mares in our studbook in a bid to improve height, size, and ability in their produce.

Remarks: At stud upon completion of 14-day testing

Click on the preview image, to see Corfu de la Vie in action. 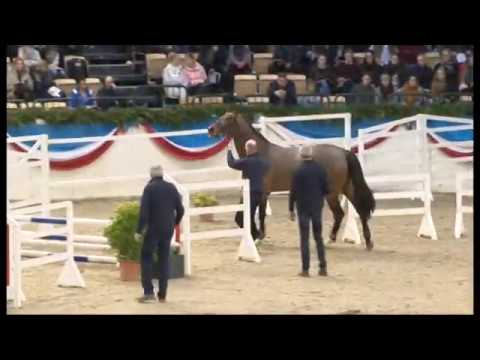