With several World Cup, Nations Cup and championship placings under his belt and having crowned his career with team gold at the Madrid Europeans in 2011, Cornet Obolensky is considered one of the most successful international top level show jumpers of his time under Marco Kutscher. He has been retired from the active show jumping scene since and is now, at 19, considered one of the best jumping sires in the world. Names of high-achievers like Cornardo NRW, Cornet d’Amour, and Comme il faut are directly connected to Cornet Obolensky.

Crack’s dam line has distinguished itself at international level in competition. His sister Corcega la Silla by Casall attracted a lot of attention in youngster classes at international horse shows under Rolf-Göran Bengtsson and is now very successfully shown at S level by Jose Antonio Chedraui, particularly in Mexico and North America. A brother to Crack, Inar C by Quidam de Revel, competed in jumping classes at international level to 1.50 m already at nine-year-old. His second dam Adele has also produced the successful sport and breeding stallion Ouinar by Quidam de Revel.

The big-framed grey stallion Crack stands out for his type and appearance. He embodies modern Holsteiner breed type; his excellent topline, with a light and well-proportioned neck blending into an ideal shoulder, and perfectly conformed withers and back deserve special mention. Crack owes his elegant Arabian touch to Amurath, a stallion he carries several times through Cornet Obolensky, Capitol and Gotthard.

Crack consistently demonstrated his jumping quality at the pre-selection and inspection sites – very scopey and with a very good bascule, he comes across as ambitious, with a can-do-attitude and a particularly striking hind leg technique. .

With the Cornet Obolensky blood as well as Crack’s female family standing for very careful, high-quality jumping, this young stallion should be able to pass on his jumping quality. His good type and modern structure should be well able to improve on mares lacking in this area.

Click on the preview image, to see Crack in action. 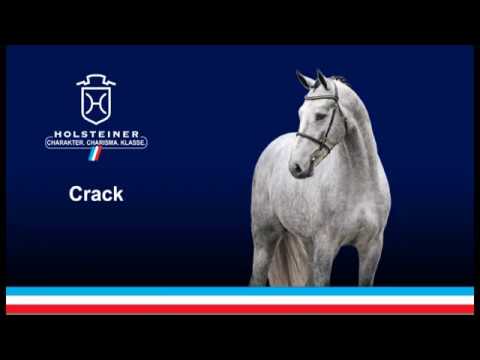