Mares of distinction have always had a particular impact on the breed, mares like for example Deka or Tabelle in Holstein, Tanagra and Dirka in France or Qerly Chin and Opaline des Pins in Belgium. Another mare in this category in the more recent history of the Holsteiner breed is Wodka, bred by Otto Boje Schoof, Hedwigenkoog, and second dam to United Way. A very noble and expressive Lord daughter, she inherited her sire’s excellent temperament and outer appearance. Wodka has produced the licensed stallions Arturo and Clearway, as well as Conway I and II. She has eight showjumping offspring with S level results, including United Way’s dam, Carassina by Concerto II. Having already achieved results to S*** level under the saddle of Nisse Lüneburg, Carassina was sold to Udo Chistee (Schlosshotel Wendorf) in 2008, with the ride given to Thomas Kleis. The successful combination not only collected numerous international results but also won the Hamburg German Jumping Derby in 2009. Four-year-old, Carassina had already produced one offspring (by Cardino) which went on to become a successful sport horse in Australia. Upon retiring from competition, Carassina was put to stud again. United Way, born in 2015, is her first post-career produce.

United Way’s breeding combines a unique constellation of successful mares and stallions which have distinguished themselves at stud and in sport. His sire Uriko is successfully shown to S*** level and is standing out more and more for his quality offspring. A number of licensed sons, including champion and reserve champion at the Neumünster stallion grading, as well as showjumping offspring highly successful in young horse classes testify to Uriko’s class and importance for the breed.

United Way’s bloodline deserves special attention for his dam sire, Concerto II. This Contender son which died from colic at just 5-year-old produced a rare count of successful Showjumping offspring. With only a few daughters put to stud, these are considered exceptional gems.

The young stallion is typey and modern with an expressively masculine face and big, bright eyes reflecting his wonderful disposition. His neck’s conformation is very good, same as his perfectly conformed back. The Uriko son has excellent movement. Displaying three equally powerful, ground-covering, and supple basic gaits, his canter is particularly remarkable.

Consistent with his bloodline, he jumps with outstanding technique, scope, and ability.

United Way has a highly distinguished bloodline in terms of jumping quality and willingness of perform. A reliable ability to pass on high-quality jumping genes is supported by his sire Uriko, his dam Carassina, and his second dam Wodka’s performance offspring. Greatly influenced by TB genes and steeped in athleticism, United Way should be able to produce performance. His very good topline should also enable him to provide his offspring with appropriately long and strong backs.

Click on the preview image, to see United Way in action. 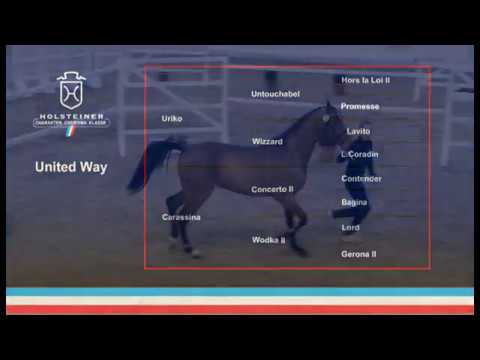