This expressive stallion convinced licensing commission and visitors alike at the 2011 Neumünster grading. Characterized by his powerfully constructed top-line and his correct legs, his appearance is clearly stamped by his grandsire Caretino. His basic gaits are ground-covering and elastic with excellent rhythm. In 2014, Casalito won young jumper classes at L and M level, including the Elmshorn State Championship, and placed 4th and 5th in the final qualifications at the Warendorf National Championships. Since 2015, the stallion has been highly successful in young jumper classes at M level under Christian Hess. Incurring no jumping penalties throughout the competition, Casalito performed brilliantly at the National 6-year-old Jumper Championships, and just missed out on reaching the jump-off due to a time penalty, finishing on 7th position. 7-year-old, Casalito impressively demonstrated his scope to expert crowds at international show grounds, jumping to win the coveted title of State Champion at the Elmshorn Holsteiner Verband facility again and placing in the international youngster tours of the shows in Groß Viegeln, Kiel, and Munich. Casalito is by exceptional sire, Casall Ask. Over the past years, he has performed exceptionally consistent, particularly in the Global Champions Tour. Winning 11 legs of the GTC since 2011, he placed 2nd in the 2014 overall standing (level on points with the winner, Scott Brash) and 3rd in 2015. In 2016, at 17, Casall performed convincingly all along the line, placed first in the Valkenswaard, Paris, and Doha legs and won the Global Champions Tour. Casalito’s dam Lalique II comes from stem 18A2, a highly interesting and influential mare family with particular importance due to the great amount of TB blood elements. She carries Landgraf I and Lord, the best sons of the TB sire Ladykiller, in direct succession. These icons of the Holsteiner breed have exerted great influence on the international show jumping scene through offspring like Landlord, Lausbub, Libero, Taggi, or Livius and Lugana. In the female line, the bloodline includes Mikado by Marlon/TB as well as the highly interesting TB stallions Nevado and Cottage Son. Dam, 2nd dam and 3rd dam have already produced show jumpers with S level achievements. Casalito‘s full sister Cathleen has already chalked up achievements in jumping classes at S** level. Colicchio, a full brother to Casalito born in 2007, is shown in competition by John Pearce and has already made quite an impression in the USA. Out of two colts from his first crop selected for the 2015 Holsteiner stallion grading in Neumünster, Casello van de Helle has been licensed for breeding. Chigaru is another Casalito son licensed in Munich-Riem. Chigaru was successfully performance tested at Marbach where he reached an overall mark of 8.45 and scored an excellent 9.5 for his free jumping ability.

Click on the preview image, to see Casalito in action. 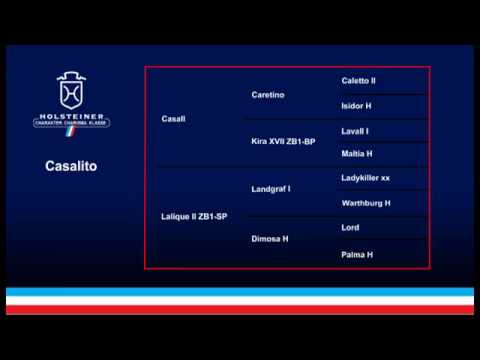