For decades, Prof. Dr. Hartwig Schmidt has been consistently focusing on breeding Holsteiner jumping horses. Having created a foundation of some of the best Holsteiner mare families, he selectively breeds them to top jumping sires. The produce of this breeding principle include Corradina, Corland, Sunstone Laurin, and also Cornetino. This big-framed stallion is particularly striking as he embodies a noble performance type, characterised by stallion expression, bright eyes, and good back. His jumping quality is a reflection of his bloodline, with his tremendous ability and scope proving particularly impressive. After licensing and 30-day testing, the stallion was put to stud for one season at 3-year-old only and was then produced for competition. At 5-year-old he had several high placings in jumper classes at M* level. Developing further during the past season, he shone with many very good placings and wins to M level under Maximilian Gräfe. In 2016, the combination was placed in international jumping classes at Kiel and Neumünster. Cornetino impressively demonstrated his particular quality as a jumper by placing 3rd in the first qualification and 11th in the final of the National 7-year-old Jumping Horse Championship in Warendorf. His breeding shows a great deal of deliberation, Cornet Obolensky being one of the currently most successful representatives of the Corrado sire line. The maternal 2nd sire C-Indoctro is one of the most influential Capitol sons with a great impact on Dutch breeding. The following sire, Landgraf, used to be the stallion with the highest earning offspring by far for years. The other sires, Ronald and Moltke, are known in Holstein to guarantee jumping ability and willingness to perform. Cornetino’s 5th dam is Retina, who won the Derby under Fritz Thiedemann and became one of the most important foundations mares in the Holsteiner breeding programme. For generations now, stem 104A has been one of the most successful Holsteiner mare families for its breeding stock and sport horse produce. The stallions Capitano, Carneval, Caretano and Contendro as well as Corradina, Athletico and Corland are only some representatives of this successful line. Out of a first crop of only 6 foals, Contessa H, a 3-year-old Cornetino daughter won champion jumping mare in Switzerland in 2016; moreover, she also won the title “Miss Switzerland“.

Click on the preview image, to see Cornetino in action. 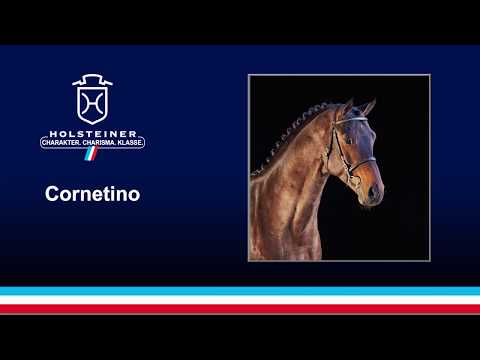