Lewine’s bloodline carries two particularly significant stallions - Livello and Corrado I – in direct succession. Livello, a Landgraf I grandson the Holsteiner Verband had bought as a foal, found his way to Sevil Sabanci and her S.I.E.C. stud after several stops. Livello saw his greatest successes under Ireland’s Cameron Hanley, with the combination finishing an excellent 4th individually at the Windsor Europeans in 2009. Moreover, his 2009 results include winning the Kiel grand prix, as well.

Cor de la Bryère son Corrado I – born in 1985– is still very much alive and kicking at the Holsteiner Verband Hengsthaltung stallion stable. He is a major player on the international jumping sire scene due to the own performance he has demonstrated for years, his highly successful offspring, including for example Corradina (Carsten-Otto Nagel), and as founder of a Holsteiner sire line but also through his grandson Cornet Obolensky. Lewine’s bloodline goes back through Locato, a Lord son known for his movement, and Rocco, a Ramzes grandson.

The maternal line traces back to the successful Holsteiner stem 162. This exceptional mare family has produced sporting heroes and icons of the breed like for example Carthago, Canturo, or Cöster. The family branch of Lewine has a reputation for particularly sound performance offspring like the Olympic horses Foliant (Dietmar Hogrefe) and Santiago (Helmut Rethemeier).

Lewine is very expressive and typey, with the big eyes and the characteristic face typical of the L-line representatives. The attractive young stallion boasts excellent neck and back conformation, has dry, correct, and very sound looking legs and four well-shaped hooves.

He moves like an athlete. His basic gaits are supple with good rhythm and big movement carried by powerful hindquarters. Lewine had stood out already as a young foal as he became the undisputed champion of the 2015 VTV/R+V Holsteiner Foal Championship in Bad Segeberg.

Lewine’s jumping is very convincing at any time. The young stallion is careful, supple, clever, and scopey, with quick reactions and an energetic take-off – a natural born jumper.

The demand from riders and breeders for the Ladykiller blood is still undiminished, given this line’s reputation for soundness, willingness to perform, and quality canter. These are the exact qualities Lewine stands out for, other than his exceptional jumping. With expressiveness and type firmly rooted in his bloodline, he should be well able to effect considerable improvement in terms of type.

Click on the preview image, to see Lewine in action. 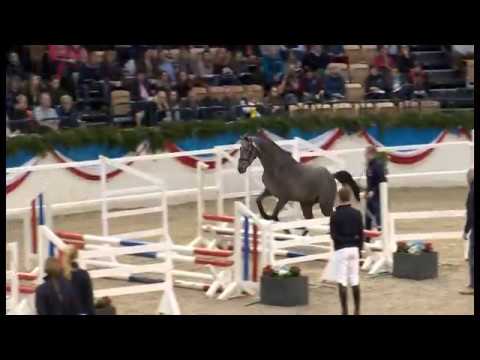