The Paul Schockemöhle/Holsteiner Verband stallion keeping GmbH syndicate jointly owns not only Diarado, but also another high calibre stallion, Stakkato’s Golden. Same as with Diarado, the owners believe this young stallion to have great promise at stud and as a sport horse.

His sire Stakkato Gold used to be an international level sport horse himself and has been producing a great number of international top level horses. He has been dominating the FN jumping breeding value estimation for years and was awarded the title “Hanoverian stallion of the year” in 2015. The damsire Canturano I won his 2006 Adelheidsdorf stallion performance test and was successfully shown through international level. With Gerco Schröder and Wout- Jan von der Schans, he achieved top results in Belgium, Germany and the Netherlands. In 2007, he won the Denekamp stallion show under saddle and in 2008, he won the final of the stallion classes. Canturano I offspring have taken home serial wins in showjumping competitions. The maternal 3rd sire, Indorado by Corrado I, placed in the final of the National Young Horse Championship with Ulrich Kirchhoff and developed into a well-respected sire in the Netherlands, boasting 48 offspring with S level achievements in Germany alone. The tail female line of Stakkato’s Golden goes back through the top Dutch sires Wolfgang, Ulft and Souvenir. The damline has produced several successful showjumping offspring in the Netherlands.

In addition to his exceptional jumping talent, the particularly typey young stallion boasts three very good basic gaits and tremendous rideability which was also reflected in his marks in the Schlieckau 14-day ability assessment. The young stallion stood and produced at Mühlen completed 50-day performance testing in Adelheidsdorf with particularly impressive results as he was given 9.0 on canter and ability, 9.5 on rideability and jumping technique and 10.0 on willingness to perform and overall impression. The jumping weighted final score of 9.33 was the best 50-day stallion test result in all Germany.

Stakkato’s Golden boasts terrific type, body proportions and quality of movement. He is expected to pass on these important qualities to his offspring. Keep in mind the great strengths of the Stakkato line – jumping manner, carefulness, and technique - when breeding to this stallion.

Click on the preview image, to see Stakkato's Golden in action. 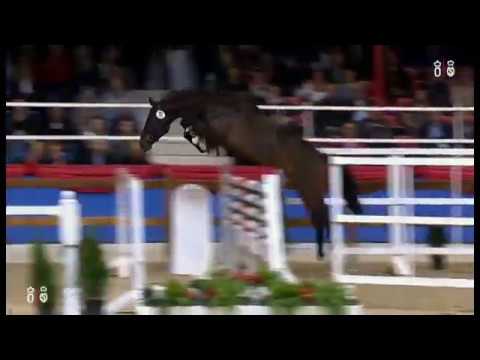